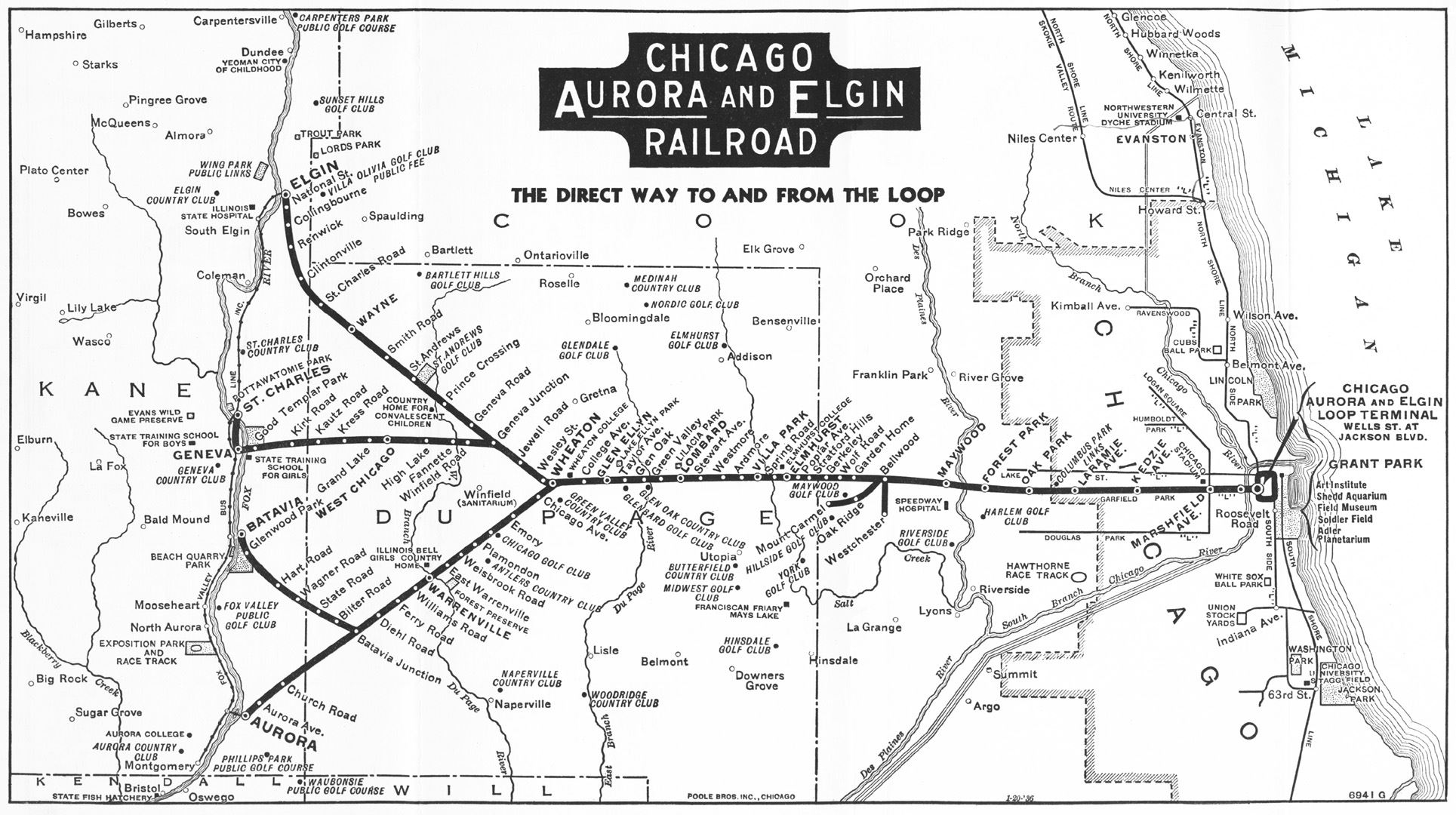 The signs are located at four different locations along the trail where four stations once stood. These signs mark the locations of Green Valley Station near Brewster Ave., the Main Street Station near Main Street, the Stewart Avenue Station near Stewart Ave., and the Westmore Station near Westmore-Meyers Rd. The signs include images of the original stations that are no longer standing, and information about the CAE Rail that once traveled from Chicago to Aurora and Elgin.

Below is information on four former stations on the Aurora, Elgin, and Chicago Railroad: Green Valley, Main Street, Stewart Avenue, and Westmore Road.  These former stations are featured along the Illinois Prairie Path.

Prior to 1920, this fourth and final Lombard stop was known as the West Lombard Station.  It was renamed Green Valley after the title of a novel by Lombard author Katherine Reynolds.  The station consisted of two small wooden shelters on either side of Brewster Avenue.  No ticket agent was available.  This was a flag stop and was served only by local trains.

To the west was the most expensive part of the Aurora, Elgin and Chicago double track.  Substantial cut and fill work was used to bridge the DuPage River Valley.  The trains crossed a high fill above Finley Road and a concrete art deco bridge over Illinois Highway 53.  Finally, the trains bridged the East Branch of the DuPage River.

Heralded by the trade press as the greatest single advance in the industry, the Aurora, Elgin and Chicago Railway opened in 1902 with 33 miles of track and powered with an electrified third rail.  Service to the Chicago Loop began in 1905.  It used the Wells Street Terminal at the southeast corner of the Loop.  For the first twelve years, it was a financial success as riders increased.  From 1914 to 1919, expenses rose faster than revenues and the railway was forced into foreclosure.  The U.S. District Court in Chicago split the railway into two parts:  the Third Rail Division and the Fox River Division.  Built a decade before automobiles and modern highways, the Aurora, Elgin and Chicago Railway faithfully served the western suburbs of Chicago and the Fox River cities for over five decades.  Electric railroads had significant advantages over horse-drawn vehicles and steam driven trains.  They were cleaner, faster, and more comfortable.

Capable of transporting 100,000 passengers daily, the railway was losing $2,000 a day.  On July 3, 1957, an injunction to continue passenger service was lifted, and by mid-day all train service permanently ended without prior notice to the public. The abandoned track bed was purchased in 1965 by the DuPage County Highway Commission for $750,000.00 which provided Lombard with a 2.75 mile strip of the Prairie Path through the village. 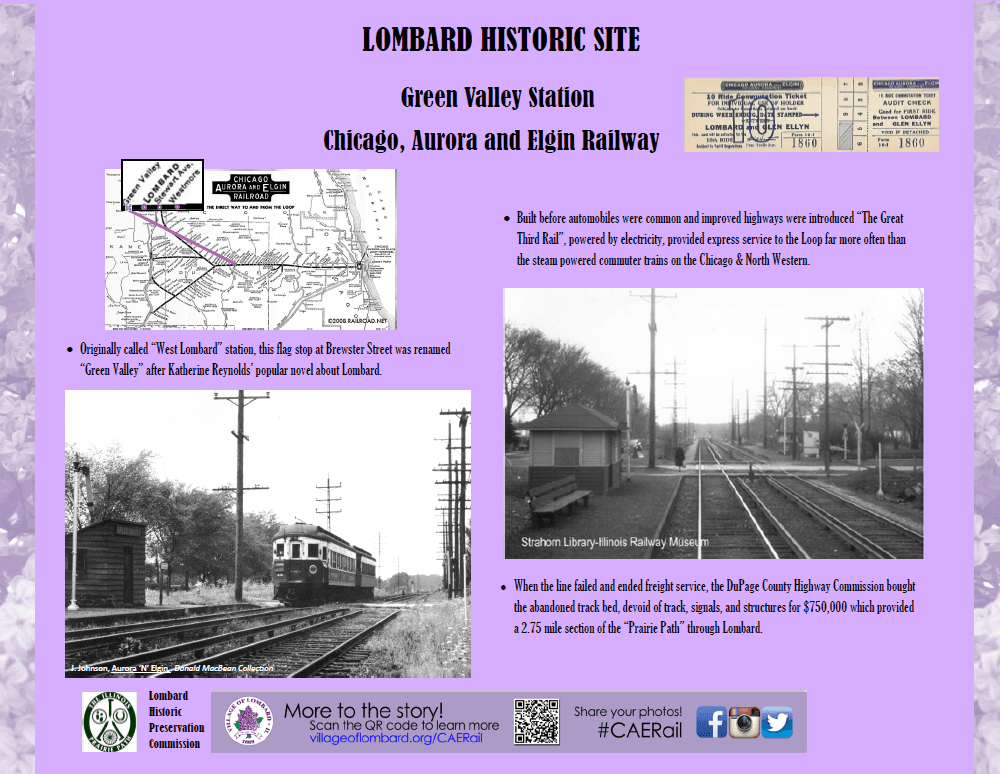 On this site, in 1902, the Lombard Main Street Station of the Aurora, Elgin and Chicago Railway was constructed. It was a brick building with a canopy that covered the eastbound platform.  This was a rare feature since most stations only provided passengers with a shelter or waiting room.  On the south side of the tracks, a freight spur led to the Hammerschmidt Oil Company.

Located about 20 miles from the Wells Street Terminal in Chicago, all trains stopped here except the important limiteds such as the Cannonball.  For most limiteds, this was the first stop beyond Maywood.  In the 1940’s a mid-day limited was scheduled to cover the 20 miles from Chicago to Lombard in 38 minutes.

The Main Street Station also housed one of the railroad’s first electrical substations which powered the third rail.  A small sign warned, “Danger – Electric Current – Keep Off Tracks.”  The live electric third rail was a constant worry to residents.  Day and night, trains would sound warnings in “railroad language” of two long and two short piercing whistles.  Many residents complained of the annoyance.  In 1906, Lombard began to purchase electric current from the substation for street lamps and commercial use.  In 1907, the power was made available for home lighting customers.

Previously, in 1899, authorization had been granted to lay, operate, and maintain a double track railway through Lombard for fifty years.  The local rate of fare within Lombard was set at a maximum of five cents.

Construction on the “mile-a-minute” railway began in September 1900 and was finished by mid-1902.  Service started on August 25, 1902, with all trains operating as locals between Aurora and 52nd Avenue in Chicago, which later became Laramie Avenue.  From there it ran on the Chicago Rapid Transit tracks to the Loop.

As open prairie evolved into suburban landscapes, stations were added and the schedules were altered.  The line began to shift from the revolutionary high-speed interurban that it was when it first opened to a commuter railroad. 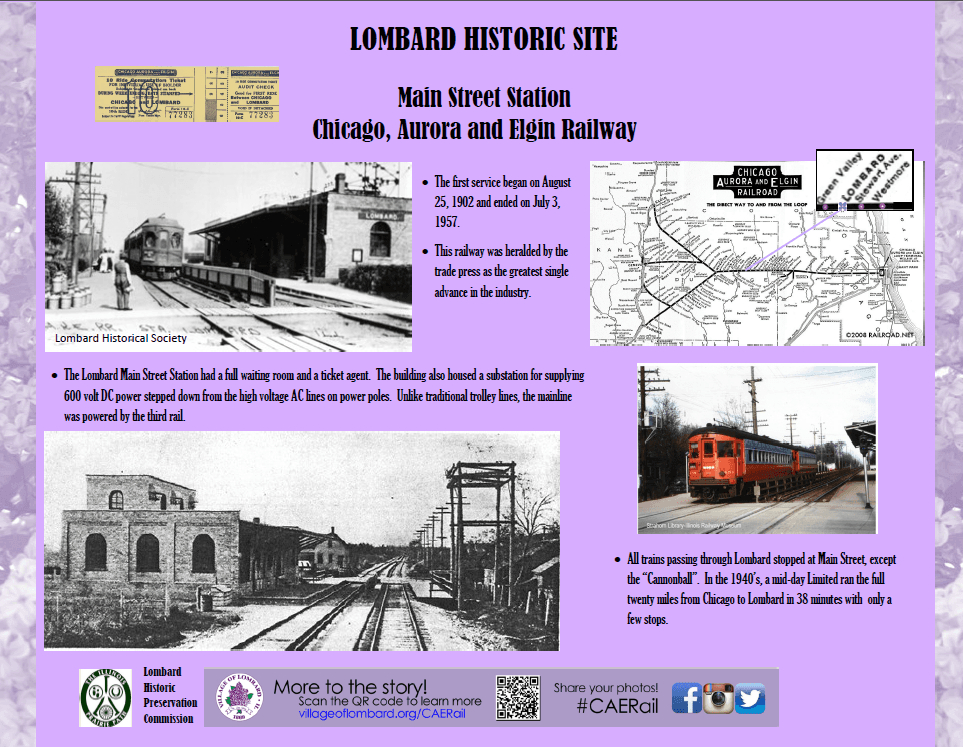 In use since 1902, when the railway began service, the Stewart Avenue Station, located on this site, was a relatively unimportant stop served only by local trains.  Located in a residential neighborhood, it was a small wooden structure with no ticket office.

The railway used a third rail to carry its power.  The power distribution system for the electrified third rail included high voltage alternating current (AC) from the powerhouse to the substations and low voltage direct current (DC) to the cars.  Commonly called “The Third Rail,” it linked Lombard, which was essentially a rural community, with the cultural offerings of Chicago. 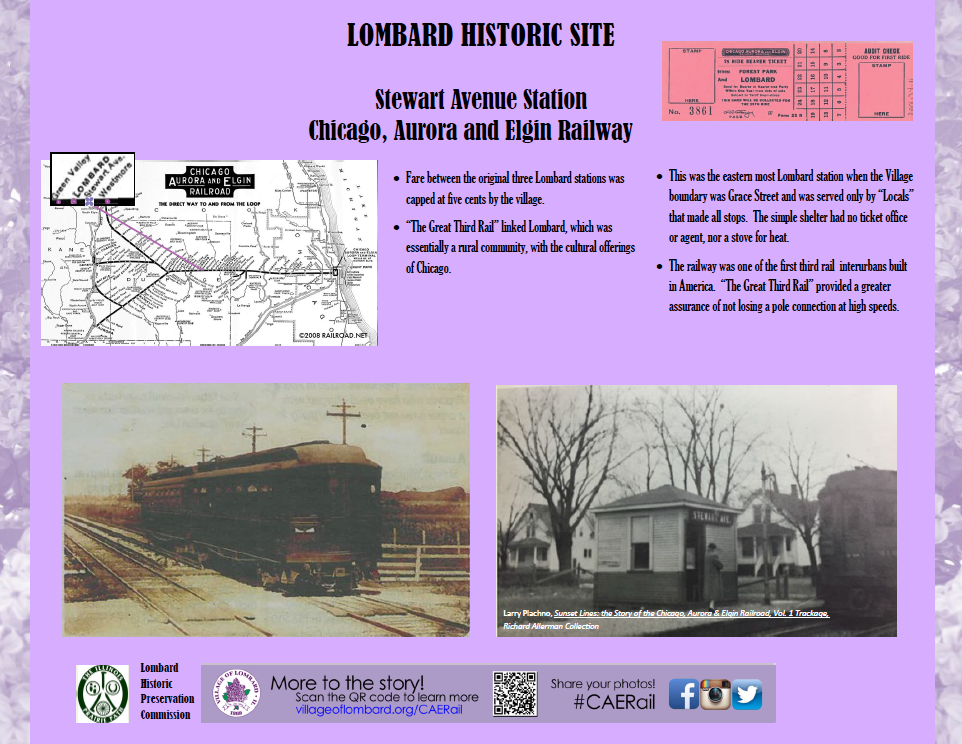 This is the location of the Westmore Station.  When the Aurora, Elgin and Chicago Railway opened for business, in 1902, this flag stop was little more than a short platform in a rural wilderness.  Around 1910, a real estate company, Home Acres, was set up by E.A. Cummings and Company of Chicago to sell lots south of the tracks.  The prospect of rapid transit to Chicago was a factor for home buyers.

A wooden station was built during the 1930’s when Lombard’s population spread to the area.  It was constructed along the Chicago bound tracks.  There was no ticket agent.  However, Alfred Ciha, who owned the hardware store just south of the tracks on the west side of Meyers Road, was an authorized ticket agent for Westmore passengers.

West of the station were sidings to store rush-hour train sets.  The side tracks were long enough to hold an entire train, if needed.  A morning express originated here, picking up the first passengers at seven o’clock in the morning.  The train cars for express arrived from Wheaton at 6:45 and waited on the siding until departure time.

In 1902, the Aurora, Elgin and Chicago Railway was the first true high-speed interurban to be built.  It had the most powerful cars in existence and scheduled “mile-a-minute" trains over most of its tracks for more than five decades.  It originally operated some milk or newspaper trains.  An occasional parlor car would run an express service.  The railroad evolved into a commuter line connecting Chicago’s Loop with the DuPage County suburbs and the Fox River Valley communities.  It also had some carload freight business.  Since the evening train headed west into the sun, the Aurora, Elgin and Chicago was nicknamed “The Sunset Line.”  After 55 years of service, the railway ended passenger operations in 1957, and the abandoned track bed became part of the Illinois Prairie Path in 1965. 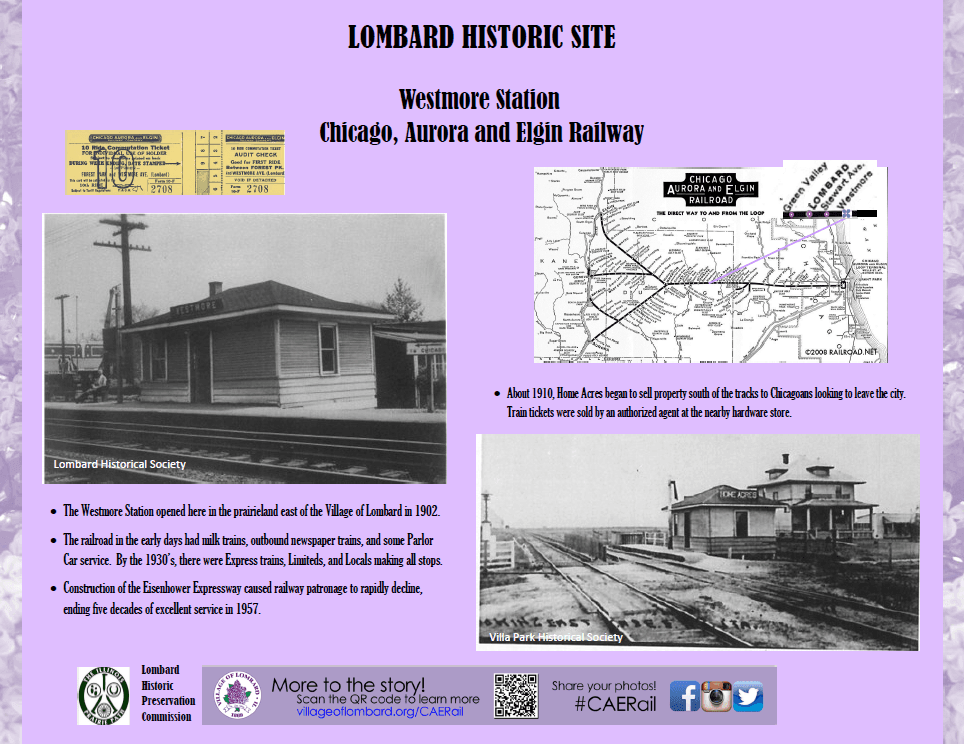